Which Level Gauge is the Best?

As a Level Gauge Glass Supplier, share with you.

The reflection type Liquid Level Gauge operates according to the optical principle of light refraction and relies on the fact that there is a difference in the refractive index of light entering the area where liquid exists and the area where vapor exists. The pressure gauge consists of a vertical cavity filled with fluid from a storage tank or container. The liquid level in the chamber matches the liquid level in the tank, which is determined by the interface line between the liquid in the chamber and the vapor in the chamber. The prism chamber or prism glass window is installed on the chamber. When light passes through the prism in an area with liquid behind the prism, the light enters the gauge without being reflected the observer. Therefore, the area of the gauge appears dark or black. However, when light is incident on the area behind the lens that contains water vapor (above the liquid level), the light will be reflected the observer and appear silver or white. The high contrast obtained from the difference in light transmission and reflection between the two areas allows accurate identification of the liquid level to be determined. The meter can be equipped with a dial as required, and can also be simply used as a relative indicator of liquid level.

Each end of the pressure gauge chamber is usually equipped with a valve and directly connected to the storage tank or pressure vessel. In the case of a pressure gauge that needs to be repaired for maintenance or a leak occurs, the valve can be isolated. 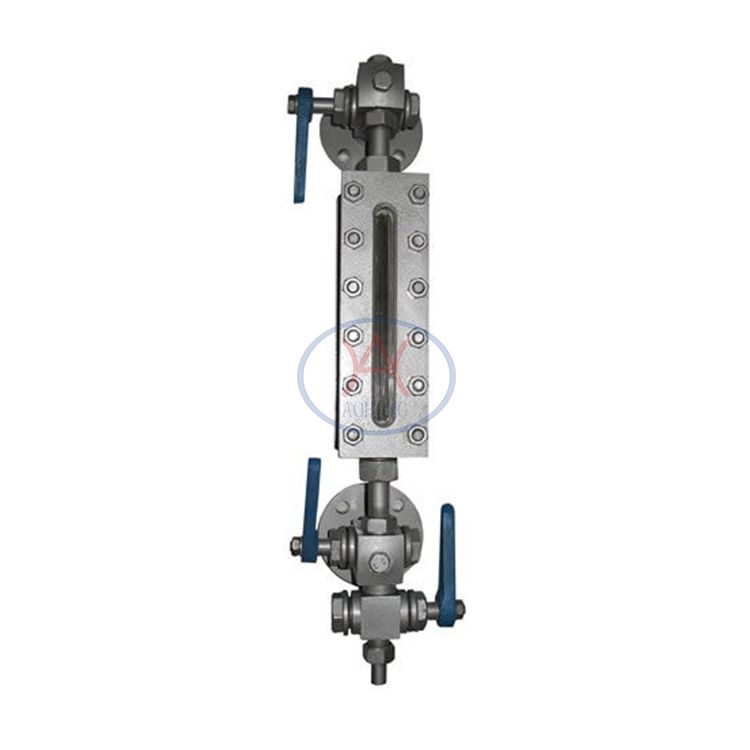 Reflex Level Gauges have lower initial costs, lower operating costs, and provide an easy way to determine the level in a tank or container. The high contrast makes them ideal for use with transparent liquids that are difficult to see directly.

For situations where the boiler water level needs to be measured or in steam generator applications, two-color level gauges are often used. The device consists of a set of light emitters (such as LEDs) and a red and a green filter, which send light to the instrument room through water/steam towards the instrument glass and the observer. The optical principle at work is that different colors of light (representing specific frequencies and wavelengths) have different refractive indices when passing through different media. When the meter room is full of steam, the green light will deviate significantly. As a result, the observer will see the red light on the meter glass. Similarly, when there is water in the gauge, the red light will deviate from the observer and the green light will pass. Therefore, due to this color change observed from the refractive index change, the water level in the boiler can be determined. Green represents liquid water, and red represents steam or steam.

The two-color level gauge may consist of a long glass or a series of portholes with exposed glass.

What is the Difference Between Mica Sheet and Mica Board?

How To Install And Maintain A Glass Plate Type Level Gauge?
NAVIGATION
Home ProductsAbout UsApplicationContact Us
CONTACT US
FOLLOW US